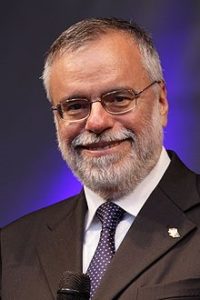 We are delighted that Andrea Riccardi, the founder of the Community of Sant’Egidio, has agreed to deliver the keynote speech at the General Assembly. The “Time Check”, as it has come to be known over the years, at the CPCE’s General Assembly is delivered by prominent guest speakers from outside the CPCE, offering their personal perspective on a topic of current affairs. Announcing this year’s speaker, Dr Mario Fischer, the incoming General Secretary of the CPCE, explains: “Professor Riccardi works relentlessly towards getting the Church to reach out to the margins of society. As Churches, we are called upon to venture out of our comfort zone and deliver the message of hope that people’s lives have a future!”

In his latest book entitled “To the Margins”, Professor Riccardi picks up on the agenda set by Pope Francis, which he already pursued in his home city of Buenos Aires and now continues into his Pontificate – venturing beyond the comfort zone within the Church to the fringes in need of the Gospel. Riccardi talks insistently about the outskirts, be they geographical or human existence on the margins of society. The bastions of the wealthy alongside city slums relegate the less fortunate to the margins in both geographical and human terms. On a global level, entire continents are ostracised, as in the case of Africa. Riccardi has coined the term “geothology” to describe Pope Francis’ maxim of reaching out to people on the outskirts.

As far as the churches are concerned, Riccardi says that they have distanced themselves from the people both structurally, by means of their territorial principle and administrative units, and in gradually cutting themselves off from the proletariat (since the industrial revolution, at the latest). He maintains that religious life must (once again) be shaped by congregations on the outskirts, in the same way that Jesus moved from the margins into the centre of focus.

“In the same way that marginalised individuals and small groups have repeatedly inspired faith, so do we Protestants – who mainly congregate in diaspora churches – wish our work to reach into society and so bear our own responsibility for the margins,” Fischer says. “We want to perform our mission as churches where it’s most urgently needed.”

Professor Andrea Riccardi (born in Rome in 1950) founded the Community of Sant’Egidio, which teaches the Gospel, serves the poor and promotes peace in many countries. Together with the Waldensian Church, a member of the CPCE attending the General Assembly in Basle, Sant’Egidio runs Italy’s official “human corridor” scheme aimed at ensuring refugees’ safe arrival in Europe. Riccardi is a Professor of Contemporary History at Roma Tre University and President of the Dante Alighieri Society. He has been awarded numerous accolades, including the Charlemagne Prize in 2009.